The Fight Night game is a board game, created by Alan Bulfin and Pii Anttila, inspired by everyday domestic relationships. It requires only one skill - a close attention to detail. It is open for participation of 3 – 10 people, to be played for any amount of time. In the game, there are cards with pictures of domestic objects, of different sizes and shapes. Players take turns to turn a card over, and if it matches one already on the table, he or she attempts to get a hold of a trophy placed in the middle of the table, and to take it before the person with the same card does.

It is a simple game that everyone can take part in, yet it establishes relationships between people, as the players have to pay close attention to your opponents.

The Fight Night will take place in a private apartment on the evening of Thursday, 24 September. Drop by and play! 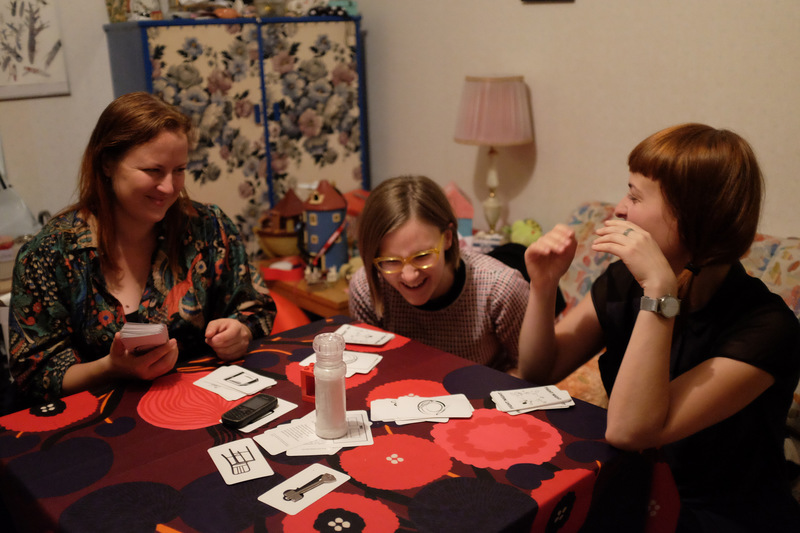 Gaming the System is a project that uses the structure of games as a starting point for exploring systems and interaction. Art and game thinking are both becoming increasingly generic, and through...

DISCORDION is an interactive sonic sculpture which makes use of both human interaction, relationships and the moving central corridors of a Helsinki city tram. Corresponding to the bellows like...
Learn more >>>

Ernie's Pop-Up Spa:"More Than the Law Allows!" Offering art-school haircuts and shoulder massage for the low price of 3 euros! Popping up around various Living Spacesevents with hair shears,...
Learn more >>>

How to Inhabit a Transitory Space

How to Inhabit a Transitory Space is a project by visual artist Egle Oddo and her students. It investigates space, seen as a communal process: an art gallery initially used as such is progressively...
Learn more >>>

During Pixelache you will be given the ability to meet an infinite amount of people... if you so choose. Your visitor's badge will be equipped with a system of altered states that you can engage...
Learn more >>>