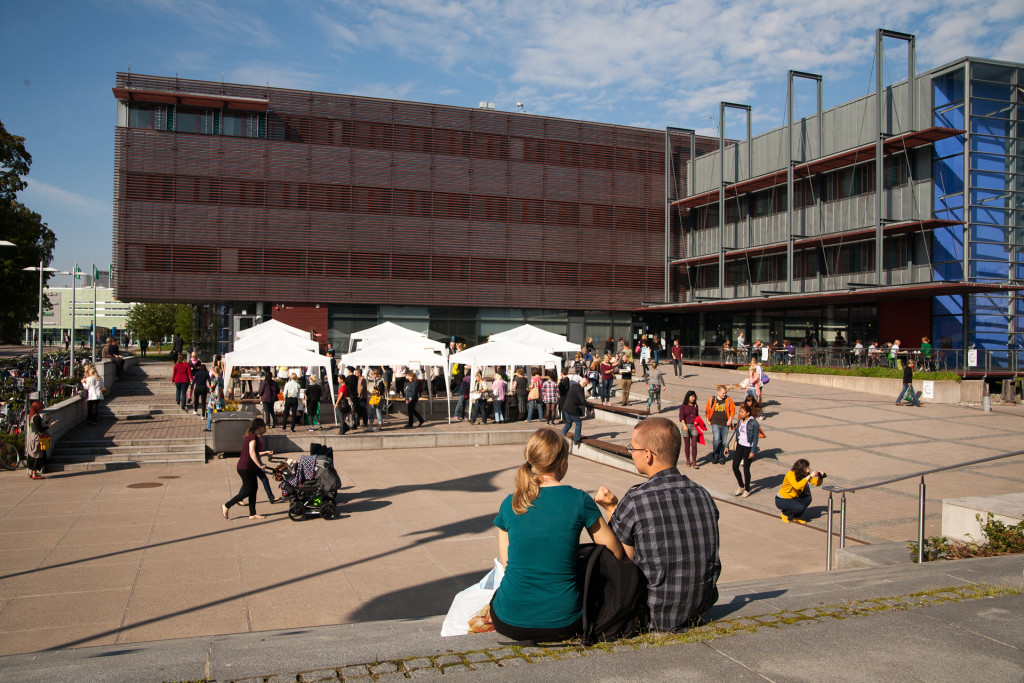 Ruoan Tulevaisuus (roughly translated, 'Food's future') is a non-profit organisation that promotes a sustainable and equitable food system. They are the main organisers of the annual Foodycle event, which Pixelache has co-produced in 2013 and 2014. This year, Foodycle becomes part of the main Pixelache festival on the opening day (Wednesday), where a programme of talks and seminars take place along with a farmer's market.

We asked them some questions, and they answered as a collective voice.

Pixelache: Ruoan Tulevaisuus is an association consisting of academic researchers, but working outside of a strict University context. What motivated you to start RT, and what do you feel couldn't be achieved within the boundaries of the department?

Ruoan Tulevaisuus: The idea for founding RT arose during a coffee break on Viikki campus. Our motivation came from the fact that we were all students on a campus which was focused on food and agriculture research but yet at times it felt like the campus wasn't reacting to changes happening in society, for example injustice (e.g. unequal distribution of food in the world) and flaws (e.g. food waste, obesity, animal welfare) in the food system. RT was there to fill a gap. We wanted to raise discussion on food issues beyond agronomy and debate them in a larger context. The founders of RT all have their academic background in agroecology, a discipline which encourages systems thinking.

How did Foodycle, and your collaborations with Dodo and Pixelache, get started?  What exactly does the name mean?

The idea for Foodycle started cooking during early 2013 as we were contacted by Pixelache to brainstorm on food topics with their then-resident, Seungho Lee (Doctoral Student at Aalto University who had back then just published Beef Finland). After only a few meetings we were determined to work together and organize something transdisciplinary related to food. During the first year we collaborated with Pixelache, and during the second year also Dodo got involved. Dodo's involvement was strongly related to their project 'Impact of the Fork' which also ran during 2014.

The name 'Foodycle' comes from food and cycle. Actually many people seem to be confused about the name and write it 'Foodcycle' instead. Maybe we should consider rebranding ourselves? 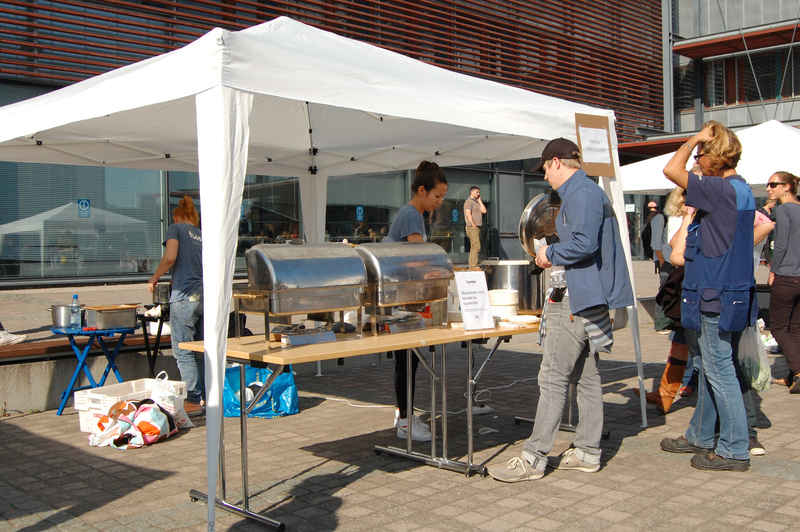 Organic food is becoming readily available even in smaller neighborhood supermarkets such as Alepa, and it's becoming fashionable for restaurants to brag about using locally-sourced ingredients. How does Foodycle/RT's focus differ from these trends in popular culture? Are terms such as 'organic' and 'local' an oversimplification or are they helping to change mainstream attitudes?

RT or Foodycle is not actively promoting any production method or food term over the other. Our work is led by curiosity. For example, local food isn't always the most environmentally friendly option, nor is organic. But on the other hand there are so many more aspects to food production, including social, committed to bringing science into the debate.

Another great way for the consumer to know about these things is to buy food directly from the producers, for example from places like farmers' markets. If a person who buys organic food gets interested in food production and its effects on the environment, for example, in that sense these terms can change the attitudes of the wider audience.

However, we realize there are problems with these terms. Let's take the word 'organic' as an example. In the United States, farmers are sometimes struggling with getting their produce sold as 'organic' simply because for some small-scale farmers the certification process for being organic may be too expensive, although they may be in practice implement organic practices.

You've used the phrase "the future of food" in the past with Foodycle. To many, that phrase would conjure terrifying sci-fi scenarios like the Star Trek holodeck, or that guy who invented that Soylent drink. But technology must undeniably play some role in the evolution of the human genome, and food is a big part of that. How do you think an intelligent consumer should approach the role of technology in their diet?

The same is true for food technology. It is inevitable that part of our foods will always be processed. Technology is efficient and utilizes raw ingredients extremely well. We waste 70% of our resources in food production just because of the choice of our objectives: meat. In Finland we, humans, consume around 5 000 million kg of food (including beverages), but our animals eat more than 10 000 million kg (including silage) per year. That is one loss we can’t point to technology. We crave for animal protein and maintain a system which causes massive losses. If we would have a better way, our environmental impact would be greatly reduced. Therefore, an intelligent consumer should be more concerned about the way how the ingredients are produced as the most massive environmental impacts are in the production of the main goods – just because of the scale.

Think of it like this. Unprocessed foods have some health benefits, but you can attain those benefits with even a relatively low consumption of unprocessed foods. Today we don’t need to spend our days and weeks harvesting our food ourselves in the woods, and that frees our time for something else. Therefore we could argue that technology as such should not be feared. But surely we wouldn't want to just eat Soylent to get by. But still, maybe there is some room for morning breakfast that is only a fuel for the body?

We are not advocates for technology, but are of the view that it is sometimes taken as the main culprit for all problems.

There are examples of processed healthy foods which have a less negative impact on the environment, for example Ambronite. It is processed, but all the ingredients are organic. Or http://impossiblefoods.com/ - the taste of meat with no meat. Or how about using insects as our protein source? There is Chapul for that. Would it really be such a big harm to eat those kinds of foods occasionally or even every day? The impacts of the substitution could be massive.

What we are saying is that an intelligent consumer should be more concerned about the way of how ingredients are produced. This is the level where the most massive environmental impacts are born. We want to open discussion on different ways of production and promote the ones we have found promising. That will be the future of food. 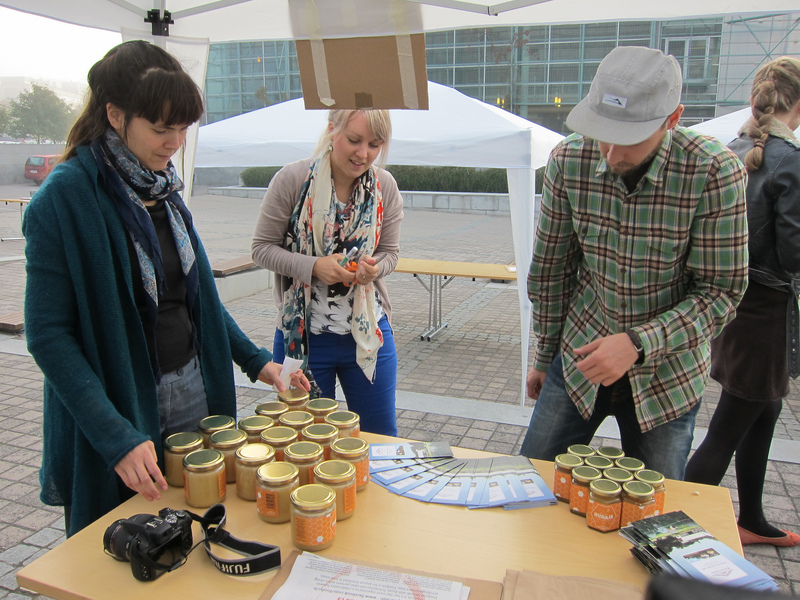 What should people expect from the Foodycle day of the festival? Is any special knowledge or expertise required to attend the talks?

Come as you are! The event is open and free for all. No previous expertise is required. The mission of Ruoan tulevaisuus is to bring (scientific) knowledge related to food systems closer to people by organizing easily approachable events at the grassroots level. This is why we organise Foodycle for the third year in a row. For anyone attending Foodycle, it is also a great way to get to know the Viikki University Campus!

What does the phrase 'Living Spaces' mean to you?

In the context of Foodycle, we think Viikki Campus has potential to be a much more 'living space'. The campus desperately needs more events in open spaces. And what serves that purpose better than, for example, a farmers' market (on an agricultural campus)?

In a wider context, living spaces evoke in us an image of a common globe, our interconnectedness with other living species and the need to preserve the (bio)diversity of all life on earth.

The third edition of Foodcyle takes place as part of this year's Pixelache Festival! Foodycle explores the future of food, and will take place in Viikki Campus at the Helsinki Think Company on...